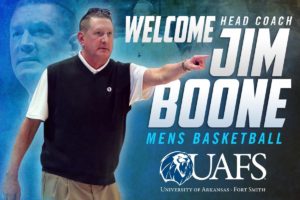 Jim Boone enters his third season as the UAFS mentor, but his 36th overall as a head coach at the NCAA Division I and II levels. The veteran leader is currently ranked 8th nationally in wins among active coaches and 32nd all-time. And, with the completion of the abbreviated 2020-21 season, Boone is only 24 wins away from reaching a monumental career milestone of 600 wins.
He was hired as the UAFS head men’s basketball coach on Tuesday, April 9, 2019.

Coach Jim Boone’s career record speaks to his success on the hardwood, but his real niche has been in rebuilding downtrodden programs and creating championship cultures.  At the helm of NCAA Division II institutions, Boone has posted a blistering 479-267 (.635) mark, guiding each of his previous four Division II stops to the NCAA Tournament, an unprecedented accomplishment. During his distinguished career, Boone’s teams have won eight conference championships, five tournament titles and have made 12 postseason NCAA appearances. From 1990-96, his California University of Pennsylvania teams recorded more than 20 victories for six consecutive years tallying an impressive 150-33 (.820) mark during that span. His 94-24 league record in the PSAC is still the best of any coach in that conference’s entire 70 year history. He was named PSAC Coach of the Year on three occasions (1988, 1992, 1996) and NCAA Region Coach Year twice (1992, 1996).

A native of Winfield, W.Va., Boone served as the head men’s basketball coach at Delta State University prior to his arrival at UAFS, guiding the 2018-19 Statesmen to a 19-12 record, a 12-8 Gulf South Conference record, the Gulf South Conference Tournament Championship and their 17th berth in the NCAA Division II National Tournament. Boone’s 94 wins as the Statesmen mentor in his first five seasons are the most in DSU history, and his overall 128 victories ranks him third all-time in the program. Boone’s teams were dominate in Gulf South Conference play, posting a league mark of 80-46 (.635) in his last 6 seasons at the Cleveland, Mississippi university. In 2017-18, the Statesmen made their third consecutive trip to the GSC semifinals, making Delta State the only school to do that in each of the last three seasons, and in  2016-17, he led the Statesmen to their 16th NCAA Tournament appearance, where they advanced to the second round and closed the year with a 23-9 record. In 2013-14,  Boone led the Statesmen to one of their best seasons in program history, as they captured the Gulf South Conference regular-season title and made a run to the NCAA Division II Sweet 16. Boone was named GSC Coach of the Year, marking the seventh time in his career he has captured such an honor. In all, the Statesmen completed a two-year turnaround of a program that had won just six games the year before Boone took over in 2012-13. The 17-game improvement represents the best among NCAA Division II institutions over this period of time. Prior to taking over as head coach of the Statesmen, Boone spent the 2011-12 season as head coach at West Virginia Wesleyan College, guiding the Bobcats to a school-record 22 wins at the NCAA Division II level and the program’s first ever   NCAA Division II Regional Tournament Championship appearance.  Under Boone’s leadership, the Bobcats (22-9) defeated perennial NCAA Division II power Winston Salem State in the opening round of the NCAA Tournament before falling to West Liberty State in the Regional Semi-Final.

Boone began his career as a student-athlete at West Virginia State College, where he was a four-year letterman. He earned his bachelor’s degree in Accounting (1981) graduating Cum Laude and followed that with a master’s in Business Administration from the University of Kentucky (1982) with a concentration in Marketing. His coaching career brought him back to his alma mater, spending three seasons as the head assistant coach and primary recruiter from 1982-85 at WVSC. Boone made the jump to NCAA DI basketball in 1986 as an assistant at Charleston Southern University, where the Buccaneers won the Big South Conference Championship. That championship experience led Boone to his first head coach position at California University of Pennsylvania. Over the next 10 years, Boone led California (Pa.) to unprecedented success, including a 228-71 record. During his time with the Vulcans, Boone’s 1992 squad posted 31 wins and completed the season as the nation’s number one ranked team. Boone also added two NCAA DII Final Four appearances, six regular season conference titles and six trips to the NCAA Tournament at the helm of the Vulcans. Boone finished his time at California University (Pa.) with a school-record 228 wins and an amazing .763 win percentage. He was inducted into the California (Pa.) Hall of Fame in 2005.

From California (Pa.), Boone moved on to the challenge of rebuilding NCAA Division I Robert Morris University, eventually leading the Colonials to the NEC Championship game in 2000. In 1999 and 2000, he led RMU to a record of 25-13 in the NEC and produced two of the best seasons in Colonials history. Boone left RMU after 2000 to take on the task of turning Eastern Michigan University into a competitive DI program. In five seasons at EMU, Boone quadrupled the program’s wins total and set several EMU attendance records. He left EMU   after the 2005 season for Tusculum College, a member of NCAA DII and the South Atlantic Conference. In 2009, the Pioneers won a school-record 20 games and the made its second-ever trip to the NCAA Tournament. He still holds the school record for conference wins over a four-year period at Tusculum.

Coach Boone has also become a much sought-after speaker and clinician on a national level, sharing his time-tested proven championship philosophy of building programs and cultures.  As well, Boone’s annual Free Fall Coaches Clinic, held each year in October, has become a staple event for coaches around the country and world.

Boone is married to the former Stephanie Van Vranken, and they are the proud parents of two sons, Jimmy and Joey.

“Jim Boone is an outstanding person and coach. Delta State is very fortunate to have Coach Boone run their program. With over 500 wins, Jim is someone of courage, ability and a tremendous leader.”
– Mike Krzyzewski, HOF Head Coach Duke University

“Coach Boone has established himself in the coaching community as one of the nations premiere teachers. I have tremendous respect for Coach Boone. He is an outstanding basketball coach, and his basketball programs are synonymous with excellence.”
– Herb Sendek, Head Coach Santa Clara University

“Basketball, as it is taught by Coach Boone, is a formula for success. Jim Boone does not just teach basketball, he teaches life lessons. He has developed a philosophy that exceeds the boundaries of offense and defense. Jim’s programs have been yearly one of the nation’s most successful on any level, and the primary reason, is because he brings an overriding purpose to everything he does. ‘Commitment to Excellence,’ is the credo that Jim has used to oversee to the values and principles that govern his teams.”
– Dale Brown, HOF and retired Head Coach Louisiana State University